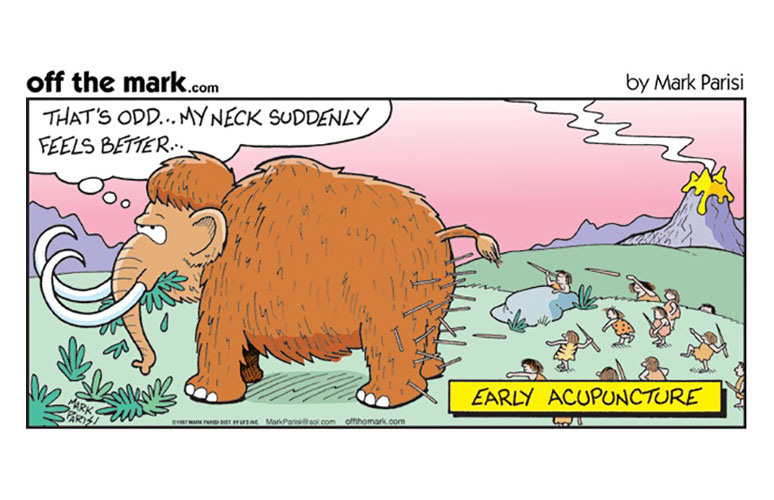 During acupuncture treatments, I often have people asking me about the origins of Traditional Chinese Medicine (TCM) and Acupuncture.  Although I’m quite sure that today, with our modern research and tools, it is practised in a starkly different manner than when it first appeared in the Stone Age.  The fact that a medicine of such importance today can trace its roots back into prehistory is truly fascinating.

Although we attribute the origins to China (indeed, we call it “Chinese Medicine”), and call it roughly 3000-5000 years old, there is a bit of speculation to this.  It is very likely that outside influences played important parts in its development, just as Chinese influences are found in the roots of many other cultures.  Ancient exploration and trade routes would have undoubtedly served as vessels to mix ideas, medicinal substances, and tools.  Being a close neighbor, Indian influence is very easy to spot in TCM herbal medicine, as many of the herbs originally grew in India and were documented for much the same purposes in Ayurvedic medicine.  Excavation of ancient tombs finds “Chinese Herbs” in other parts, such as a bundle of Ma Huang (Ephedra plant) discovered in a Neolithic tomb in the Middle East, at a time thousands of years before the Chinese Materia Medica was being compiled.  Many people will remember the discovery of Otzi, the famous “Iceman” mummy of a Bronze Age man in the Italian Alps, and how he had tattoos that seemed to correspond to acupuncture points.

Safe to say, the exact ancestral origins to our modern practice are lost to history.  Many theories circulate, and it can be left to the imagination how exactly an idea bloomed in a time when all we had to look to was our natural environment for tools to help us stay alive and well.  In terms of acupuncture, it would not be a stretch to think about how the instance must have arisen when someone discovered that points “here” could have effect on other points “there”.  Perhaps it was the constipated early human, whose intestines were plugged up by gorging on the latest large game hunt, who discovered “When I rub this tender area on my hand or on my foot, I can actually feel my bowels start to move.”

Of course like many other important discoveries, it is likely that similar findings were made by many other people in many other areas.  It is thought that the use of stone knives and lances used for primitive surgery may have fostered the realization that the puncture of one area brought about sensation in another.  Warriors hit in battle with arrows could have discovered pain travelling along certain routes that would become somewhat predictable.  Observations of the skin would discover that discolorations or changes would occur in certain areas in relation to disease or trauma in other areas.

Since the human race owes its development to curiosity and experimentation, these ideas would have been fostered through centuries of trial and error.  Ground-breaking discoveries would have been made alongside marked failures as the makings of a line of therapy would have started to form.  When people ask me about the safety of TCM and acupuncture, I like to point out with a smile that few other medicines in use today can boast as long of a period of human testing (besides the strict modern rules and regulations that all registered practitioners must adhere to, I might add!).  Over time, and as civilization developed, this knowledge was written down.  And it is here that China began to shine as the civilization that organized, studied, and developed these methods into a structured form of Medicine.

With these roots in ancient “trial and error/borrow and trade”, Chinese Medicine would grow as an integral part of Chinese culture, having its theories shaped and cultivated by religious beliefs, pragmatic philosophy, and even politics as different Dynasties rose and fell.

Today we have “picked and chosen” what has suited us from this vast compendium, to give us something we can standardize and integrate into a modern model of therapy.  Our modern style of acupuncture is incredibly versatile and able to apply to a wide range of concerns and situations.  But we do not forget its roots, and we are indeed doing what has always been done in history – pulling out what we think of as relevant parts of something that has served us in the past and grow it to relate to our current situation.  Of course you never know when something that has been passed-over will become important in the future, so it is important to preserve the history as best we can.  I am so happy that remembering these roots is a core part of the TCM/Acupuncture education, as we read from the Ancient Texts and learn about the Founding Doctors in this fascinating field.  But that is a whole other story altogether!